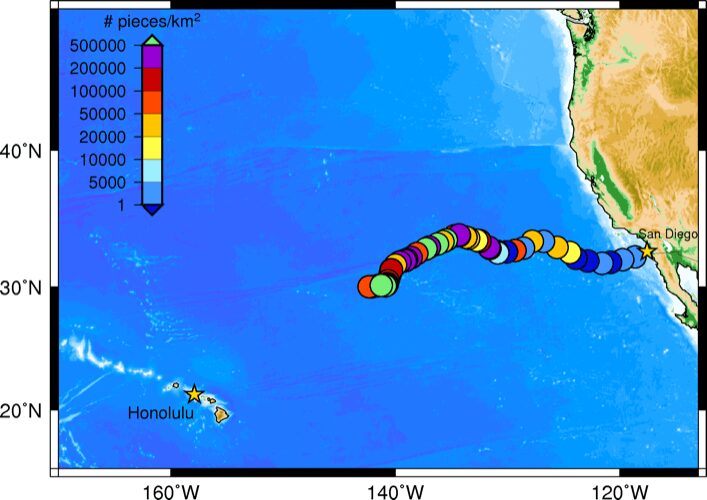 Plastics at SEA: North Pacific Expedition 2012 is a scientific research expedition conducted by Sea Education Association (SEA) dedicated to the study of the effects of plastic marine debris in the ocean ecosystem.  Plastics are versatile, durable and inexpensive materials that have become an important part of our daily lives.  Because of their extensive use and slow degradation, plastics have also become a ubiquitous presence in the world’s oceans.  In October 2012, 38 scientists, sailors and students will embark upon an expedition from San Diego, CA to   Honolulu, HI to tackle tough questions about the impacts of plastic on the ocean ecosystem, while also providing updated estimates of floating plastic concentrations in the region dubbed the “Great Pacific Garbage Patch”.

This expedition is a natural extension of a more than two-decade-long effort by SEA students and staff to measure plastic debris.   First described in the North Atlantic by former SEA scientist R. Jude Wilber in Oceanus magazine in 1987, floating plastic debris has been collected by several thousand undergraduate students who hand-pick, count, and archive tiny pieces of plastic collected in plankton nets, amassing an unrivaled dataset describing the extent of plastic pollution in the North Atlantic and North Pacific Oceans.

SEA has catalogued and archived more than 100,000 individual plastic pieces since 1986, and SEA authors have published analyses of these data in a number of scientific articles.  We are currently studying the plastic material to understand the ultimate fate of plastics in the ocean, as well as the organisms that make this floating debris their home. SEA is committed to the highest scientific standards so that this research can better inform the public and policy makers on the role humans play in the present and future of the oceans.

This expedition is funded by Sea Education Association, with funding from the Henry L. and Grace Doherty Foundation in support of the web-based and educational outreach programs. Additional support provided by Patagonia and Elemental Herbs. Crew gear provided by MO BIO.